Carbon Fiber Composites and NGInnovations will learn May 15 whether they are winners in the third annual Shale Gas Innovation Competition.

Carbon Fiber Composites and NGInnovations will learn May 15 whether they are winners in the third annual Shale Gas Innovation Competition.

Could West Virginia-made fiber-reinforced plastics be the hottest new thing to improve the shale gas industry? Or how about an automatic system for logging data about fluids transport, patented by a West Virginia start-up? Two Mountain State businesses—Carbon Fiber Composites (CFC) of Cabell County and NGInnovations of Kanawha County—will learn on May 15 whether they are winners in the third annual Shale Gas Innovation Competition. They’re among 13 businesses vying for four $25,000 prizes in the competition sponsored by the Shale Gas Innovation and Commercialization Center of State College, Pennsylvania.

CFC entered the competition not with a product or service, but its manufacturing process. “I work quite specifically in fiber-reinforced plastics,” says company owner and President Brian Alley. “I use a vacuum-infusion process: The resin is mixed and introduced to the fabric under vacuum. The pieces are very lightweight and inexpensive to produce—particularly for complicated shapes,” Alley says. As far as he knows, he’s the only manufacturer in the state using this process. He makes aircraft parts and light sport aircraft—kit aircraft people assemble in their garages—but sees a lot of potential for his process in the shale gas industry. “It’s corrosion-proof and isn’t attacked by the chemicals in gas and oil,” he says. “It could be used to manufacture anything from large containment tanks to pipe or structural members of all sorts.”

Asked what the exposure of the competition could do for CFC, Alley looks to the example of a Missouri fiber composites manufacturer he says was started by several guys in a garage and grew in just a few years to 350 employees in three states—all by tapping just one niche market: prefabricated drainage system parts needed by pourers of concrete. “There’s a market here for us,” he says. “We have very high hopes of obtaining contracts to produce large quantities of materials for companies involved in shale gas.”

NGInnovations submitted its “C-FIT” fluids monitoring unit to the competition. “Its primary use is to be mounted on trucks that are hauling liquids,” says NGI President Don Booth. “It’s basically used to locate a pick-up by GPS and date and time stamp it, and then when the driver discharges the liquids it’ll also log how much is discharged and where, with a date and time stamp.” The unit also detects the type of fluid: fresh water, brine, or oil. A prime example is salty hydraulic fracturing flowback, for which some states require oil and gas operators to keep logs of transport and disposal. The data can be transmitted by cell signal, Booth says, but since many industry pick-up and discharge locations are remote, the ability to transmit by satellite is a plus. 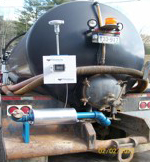 The logs of time and location data created by NGI’s system make it easy for operators to address reports of drivers dumping flowback at illegal locations, Booth says. The system can also be used to monitor fluid content of stationary tanks, and it has applications not only for the oil and gas industry but for any industry that transports and stores fluids, he says—other wastewaters, for example, or chemicals.

NGI also markets a product for treating produced water from oil and gas wells. The company currently employs five, Booth says, but he hopes, through the exposure at this competition, to triple or quadruple that by mid-2015.

More than 80 applicants entered this year’s competition. Other finalists include Advanced-Tec Materials of Hazleton, Pennsylvania, for micron-sized rigid foam particles that are used as an additive for high-performance drilling muds, and the University of Pittsburgh, for controlled mixing of coal mine drainage and oil and gas flowback to deliver a specified quality for blended water for use in hydraulic fracturing.

The Shale Gas Innovation Competition has previously been open only to Pennsylvania entrants but includes entries from West Virginia this year through 2016 thanks to a grant from the Claude Worthington Benedum Foundation.